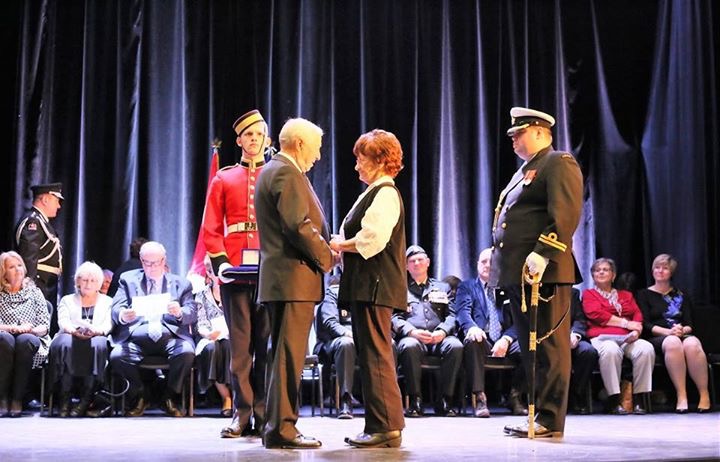 It is on Sunday, April 2nd, 2017 on the occasion of the Quebec Lieutenant governor medals ceremony at the Royal Military College of Saint-Jean that his Excellency, the Honorable J. Michel Doyon handed Mrs. Rita Beaulne the medal awarded to her late husband Jean-Guy Beaulne, resident of Saint-Lazare.

It was with a lot of emotion, and in the presence of the members of her family, that Mrs. Beaulne received the medal.

Let us recall that, at the request of elected officials, Mr. Jean-Guy Beaulne’s candidacy was submitted for a Lieutenant Governor’s Medal. A Saint-Lazare resident since the age of 2, Mr. Jean-Guy Beaulne, who died at the age of 85 on January 16th, 2017, was a strong supporter of the elder’s rights. His contribution to the Municipal Family Policy and the Senior Friendly Municipality’s steering committee will have contributed to making the administration more aware of the elders’ needs, but also to creating a permanent Elders’ committee which oversees their well-being and emancipation since September 19th, 2016. By means of social media, Mr. Beaulne will have contributed to mobilize elders of the region and to counter isolation. His implication and perseverance will have marked the entire community.